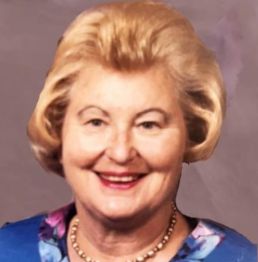 Mercea was born on Saturday, March 15, 1934, in Philadelphia, to Henry and Pauline Stiritz Panfil. She was the second child of five and had four brothers.

The Panfil children grew up on a large estate on Fitzwatertown Road in Willow Grove near the famous Willow Grove Park. Mercea was gifted and graduated from high school early at the age of 16. She then went on to Hood College in Frederick, MD, where she received her BA. After her father died suddenly, she resolved to follow in his footsteps and become a lawyer. She enrolled in the University of Pennsylvania School of Law, where she was one of two women who graduated with a Juris Doctorate in 1956. She wrote several published articles and clerked with Judge Stern of the Pennsylvania Supreme Court. She started her career as one of the first female lawyers to work for Bucks County PA, in various areas including the office of public defender and the highway department. Many of her cases involved the bypass around Doylestown, PA. She was a lifelong member of the Bucks County Bar Association. She finished her legal career with the federal government at the
Small Business Administration starting around 1972 and finishing about 10 years later, all while maintaining a private practice out of her home at 85 W. Oakland in Doylestown.

Mercea had an eye for investment and read voraciously. She loved investing in real estate. Mercea and her first husband, Richard Mears, acquired three houses on S. Clinton Street in Doylestown. In addition, they purchased two properties on S. Main street in Doylestown. On one of these properties, Richard built a state-of-the-art office especially designed for oral surgery that remains practically unchanged to this day. They also purchased a 143-acre farm in Ottsville, PA, as well as a summer house in Point Pleasant, PA. With her second husband, William Hadigian, she purchased property in Ocean City and Rio Grande, N.J. She knew how to pick stocks and would watch Wall Street Week religiously on PBS.

Mercea had a wonderful soprano voice and her singing would light up any room. One weekend while singing in the Hood College Choir, the choir of Franklin and Marshall College came to do a joint concert. It was then that the pianist of the Franklin and Marshall College, in his tux, caught her eye. They met after the concert and exchanged phone numbers. The young man, Richard C. Mears, Jr. was a pre-dental student at the time and their relationship blossomed. On June 23, 1956, they were married, just after Mercea graduated from law school and after Richard (nicknamed Dick) had graduated from dental school at Temple.

On June 7, 1958, they welcomed their first child, Cynthia Jane Mears. She is the only girl grandchild on the Mears side of the family. Richard C. Mears III arrived on September 26, 1957. Grandpa and Grandma Mears were thrilled that Grandpa had a namesake.

This family of four enjoyed living in Doylestown, with fountains in the back yard, and visited their summer house on the Tohickon creek in Point Pleasant, PA frequently where they would swim in the creek and sleep in the 200-year-old house.

However, this world was shattered by the murder of Richard C. Mears Jr. on November 5,1970, at the summer house. Mercea was stunned, but she handled it with wisdom and resolve. She went back to work full time as a lawyer so that she wouldn’t have to sell the many properties she and Dick had purchased in their 14-year marriage. She also worked hard to continue to support her two children’s attendance at Germantown Academy, to ease their trauma.

It was on a trip to the Far East to pick up Cindy after she had spent a year in Japan that Rich happened to sit next to the man who would become Mercea’s second husband. Rich was bored and so they played chess. Then he introduced him to Mercea. The rest of the trip they all hung out together playing games and tennis. The man’s name was William (Bill) Hadigian, and that was the start of a relationship that lasted 43 years. On May 29 1976, Mercea married Bill.

Mercea and Bill loved to play bridge with their friends and pinochle with their family. Mercea had a ladies bridge club, where she formed long-lasting friendships, especially with Sylvia Vandergrift, Jane Fox Laquer, and Polly Spare, all of whom survive Mercea.

Mercea and Bill travelled extensively. They traveled to 5 continents and visited almost every state in the United States.

Mercea is survived by her children, Dr. Cynthia Mears Bacalao and Richard C. Mears, III, and five grandchildren, Dr. Emily Bacalao and Andrew Bacalao and Grace Mears, Joy Mears and Richard Mears, IV (Ricky). Mercea also is survived by her brother, Robert Panfil, as well as many nieces and nephews. She was preceded in death by her mother, Pauline Stiritz Panfil, affectionally known as “Mimi”; her father, Henry Panfil (also a lawyer); and her brothers, Henry, Wayne and Roger.

A memorial service and interment will also be held at 11 a.m. September 2, 2022 at the chapel of Whitemarsh Memorial Park, 1169 Limekiln Pike, Ambler, PA.

In lieu of flowers, memorial gifts may be sent to Ambassadors Football, Box 847, Twinsburg, OH, 44087-9921. This is a soccer ministry mission organization in which her son, Richard, is currently serving.