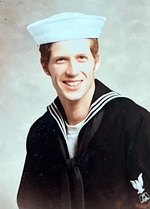 Troy Eric Duke of Kintnersville, PA, passed away surrounded by his family on Monday, May 9th, 2022, in Lehigh Valley Hospital - Cedar Crest, Allentown, PA. He was 60.

Troy was born in January of 1962, in Winchester, Virginia. He graduated from Pennridge High School in 1980 and joined the U.S. Navy in December of the same year.

After 25 years of service in the Navy, Troy retired but continued to serve his fellow sailors by managing the Enlisted Club at Naval Air Station Willow Grove. Troy loved to care for others, so his work brought him to BARC Developmental Services and Home Helpers Home Care later in his life.

When he wasn’t working hard, Troy enjoyed time with his family and friends. He spent happy times gardening, fishing, camping, caring for pets, and of course cooking. He never stopped trying new adventures or new recipes.

As Troy goes to join his mother, Marlene (Coady) Kleiner, father, Carl Duke Sr., and brother, Terry Duke, he is survived by his spouse, Bernard App; the mother of his children and previous spouse, Debra Ferretti; his two daughters and their spouses, Margaret Duke & Rina Duke and Lauren Goodwin & Todd Goodwin; and his three grandchildren, Isabella (Izzy) and Abigail (Abby) Goodwin, and Dev Duke. He will be grieved by his brothers Carl Duke Jr., Pat Duke, and Chris Duke, along with many nieces and nephews.

A graveside service with military honors will be held at Beulah Cemetery, 238 Almshouse Road, New Britain, Pennsylvania, on Saturday, May 21st, 2022, at 10:00 am.

A Celebration of Life ‘After Party’ will be held at 12:00 pm in Coopersburg, Pennsylvania. The family will be there to welcome friends and relatives.