To share your memory on the wall of Doris Whitman Tartakoff, sign in using one of the following options:

Provide comfort for the family of Doris Whitman Tartakoff with a meaningful gesture of sympathy.

She was born in Boston on January 6, 1930 and graduated from Roxbury Memorial High School in 1947. At 19, Doris married George Whitman and moved to Sharon, MA where she had and raised two sons. She was widowed at the age of 40 and was fortunate to find love again with Richard (Dick) Tartakoff, whom she married and lived with for 43 years. Dick and Doris moved to Avon, CT where they resided their whole marriage, until Dick’s passing in November 2018. In January last year, Doris relocated to the Garden, Memory Care Unit, at Pine Run. The Staff brought light to her life this past year with their love, hugs and resident programs.

For many years, Doris worked as a bookkeeper. First after High School and then later for her brother Joe’s company. After moving to Avon, Dick and Doris became part of the Community by operating a small restaurant, MJ’s, in Corbin’s Corner where Dick did most of the cooking and Doris did the baking and the customer schmoozing. In addition to her famous brownies, kept alive by her niece Emily, Doris was known for her jello molds, and her handmade chocolates:especially her cameos.

Doris always had a soft spot in her heart for animals. This could be any kind of animals! At one point it was the traditional dogs and cats, then her two turtles and finally she befriended the squirrels with peanuts she would feed them. They would eagerly anticipate her each day by clinging to the screen door waiting for her sweet conversation and their peanuts. This past year, her new pet was either her stuffed motorized cat or any one of the dogs that would come for a weekly visit to befriend the Garden residents.

Doris was preceded in death by her parents, her siblings, and two husbands. She is survived by her sons, Gene and Neil (Susan), stepchildren Nina (Richard), Peter, Katy, and Gretchen (Brian), her grandchildren Tobye, Emma (Andrew), step grandchildren Nicole, Ben, Sam, Jen and Josh, and numerous great grandchildren, as well as nieces and nephews.

A graveside funeral service will be held at Sharon Memorial Park on Thursday, January 23 at 11:45 am. Please arrive to cemetery by 11:30 am.

Donations should be sent to the Alzheimer’s Association, 225 N. Michigan Ave., Fl. 17, Chicago, IL 60601 www.alz.org or to a charity of your choice.
Read Less

Provide comfort for the family by sending flowers

Donations are being accepted for: Alzheimer's Association.

We encourage you to share your most beloved memories of Doris Whitman here, so that the family and other loved ones can always see it. You can upload cherished photographs, or share your favorite stories, and can even comment on those shared by others. 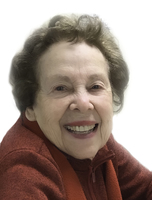