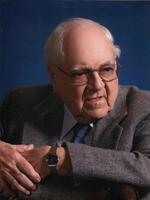 Joseph Henry Macdonald, Jr. of Warrington, PA passed away in the Neshaminy Manor on Monday, September 2, 2019. He was 95.

He was formerly employed in Methods Development with Western Electric of King of Prussia, PA for 39 years, prior to his retirement. Joe was a Sergeant and served in the US Army Air Corps during World War II. He was an avid Phillies and Eagles fan and enjoyed spending time with his family.