To share your memory on the wall of Howard Gathright Esq., sign in using one of the following options:

Provide comfort for the family by sending flowers or planting a tree in memory of Howard Gathright Esq.

Provide comfort for the family by sending flowers or planting a tree in memory of Howard Gathright Esq.

Print
Howard Thomas Gathright Esq. passed away peacefully on Monday, June 3, 2019. He was 84.

Howard was an accomplished attorney who practiced in Doylestown, Pa. He was a 1953 graduate of Northeast Catholic High School. He earned a Bachelor Degree from the University of Pennsylvania 1957 where he played collegiate basketball and a Juris Doctor from Temple University 1963.

Services were private under the direction of the Varcoe-Thomas Funeral Home, Doylestown, PA.

To send flowers to the family or plant a tree in memory of Howard T. Gathright Esq., please visit our Heartfelt Sympathies Store.

Receive notifications about information and event scheduling for Howard

There are no events scheduled. You can still show your support by sending flowers directly to the family, or planting a memorial tree in memory of Howard T. Gathright Esq..
Visit the Heartfelt Sympathies Store

We encourage you to share your most beloved memories of Howard here, so that the family and other loved ones can always see it. You can upload cherished photographs, or share your favorite stories, and can even comment on those shared by others.

Posted Jun 11, 2019 at 12:54pm
My first job out of law school was with Pratt, Clark, Gathright & Brett and I worked closely with and for Howard on many matters during the six years I worked at the firm. He was always very supportive and provided many insights on the practice of law. We were also friends socially and we played a lot of tennis together. He was always fun to be with and boy did he love the Flyers. I remember going to the games at the Spectrum and watching them on television at Howard's house. Howard had a zest for life that could be contagious. My sincerest condolences to his family. Rick Atherholt
Comment Share
Share via:
M

Posted Jun 09, 2019 at 09:01am
Please accept my condolences on the loss of your Dad. I started my legal secretarial/paralegal career working for your Dad over 40 years ago and I am still with the firm today. Your Dad was a great man who gave a lot to his community over the years and an attorney and employer I highly respected. Although he came to the office in recent years, I always remember him as the vibrant attorney who helped start my carrer. 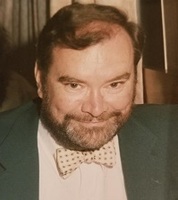